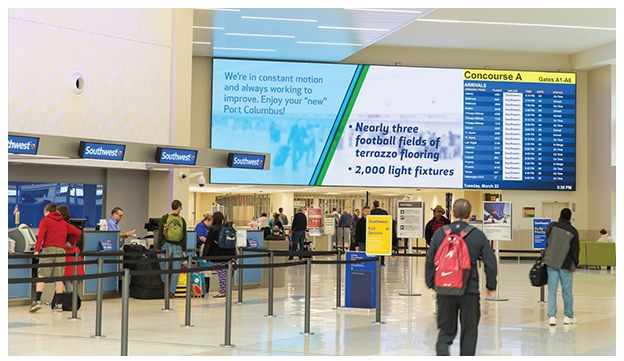 Delta, a pioneer in display and monitoring solutions, is supporting the modernization of Port Columbus International Airport in the U.S. city of Columbus, Ohio, with its fine pitch 3mm Indoor LED displays. The two giant LED display boards in the Columbus International Airport concourse are built using Delta’s fine pitch LED screens measuring 13.44m wide and 4.32m tall for each display board, with a total resolution of 4,480 x 1,440. The flight information from 52 ticket counters can be displayed on the giant LED screen with high definition display which is over full HD resolution. In addition to real time flight information, it can integrate emergency message releases, airport information updates, baggage information display, and commercial messages using screen layout management.

Port Columbus International Airport wanted their renovation design to reflect the modernization of the airport. In March 2016, a three-year, $80 million terminal renovation was completed, offering a bright and modern new airport gateway that highlights the country’s 15th largest city. The new upgrades expedite the speed of business and facilitate the airport to more efficiently connect more than seven million travelers that go through Ohio with the rest of the world.

David W. Saleme, Business Development Manager, Concessions, at Port Columbus International Airport wanted to transition the displays to direct view LEDs. He selected LED-based displays for their exceptional clarity and long system life. A major factor was also picking a display that featured a bezel-less design so that images and messaging would make a greater impact on the 7+ millions travelers of the airport.

“Internally, there was a lot of back and forth about the specific size of the wall and the pixel size, since both would directly impact cost. We had identified a return on investment that we expected to see for the life of this video wall, which helped to drive the final product selection,” said Mr. Saleme. “The team reviewed several manufacturers, but we went with Delta’s 3mm LED display components. In person, they were stunning and clearly well-designed.”

Delta’s 3mm fine pitch LED features smart module technology, ensuring uniformity after calibration of the screen. Mr. Saleme and his team noticed that these LED modules were much easier to work with than traditional video displays, where each unit can have random outages. The modular design makes the design of power and signal cables between cabinets more reliable, while the flexibility of the displays allows them to be utilized in several ways. A bezel-less system was a major factor in going with the 3mm fine pitch LED displays. This ensured proper alignment and a more impactful image on a legacy LED display wall. These display modules, at 18.9 x 18.9 x 3.42 inches, were easily scaled to create the wall Mr. Saleme had envisioned.

“The quality of the design of the entire product stood out. Not only was the visible front facing display exceptional, but attention was paid to the design of the back of the unit, and how well the units connected to one another. This provided a high degree of confidence in the overall system,” said Mr. Saleme.

With more than 1,300 square feet of LED availability located on the ticketing level, messaging and content is clear and of an incredible scale. Travelers in the ticket lobby will not be able to miss the displays. The LED display showcases the cultural attractions and business strengths of the Columbus region. When not used for advertising, these digital displays also feature videos about air service, airport amenities, and more.
“Passengers and employees alike have had a very positive reaction to the video walls,” said Mr. Saleme. “The sheer size alone is impressive, but the 4K and greater resolution has helped us to create and display incredibly clear and precise imagery.” On the grand opening day of Columbus Airport, the new LED display board provided clear information and excellent image quality, receiving much praise and many positive comments from the airport and travelers.

Delta, founded in 1971, is a global leader in power and thermal management solutions and a major player in several product segments such as industrial automation, displays, and networking. Its mission statement, “To provide innovative, clean and energy-efficient solutions for a better tomorrow,” focuses on addressing key environmental issues such as global climate change. As an energy-saving solutions provider with core competencies in power electronics and innovative research and development, Delta’s business domains include Power Electronics, Energy Management, and Smart Green Life. Delta has 153 sales offices, 61 R&D centers and 40 manufacturing facilities worldwide.

Throughout its history, Delta has received many global awards and recognition for its business achievements, innovative technologies and dedication to corporate social responsibility. Since 2011, Delta has been selected as a member of the Dow Jones Sustainability™ World Index (DJSI World) for 6 consecutive years. In 2014, Delta was ranked by CDP (formerly the Carbon Disclosure Project) at the highest A-level of the Climate Performance Leadership Index (CPLI), and is the only company from nearly 2,000 listed companies in Greater China to make the CPLI list.