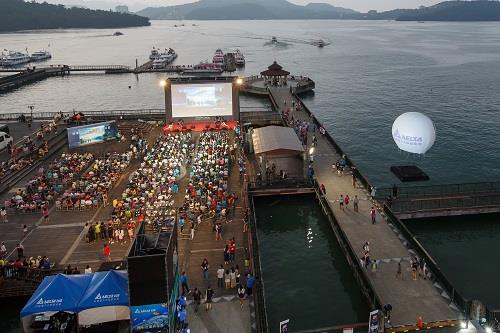 The Delta Electronics Foundation today held its “8K Projection at the Sun Moon Lake – Converging Greatness” themed charity event to display “Water with Life”, a documentary filmed in 8K resolution and projected with Delta’s state-of-the-art 8K projector, to spark public awareness on the importance of protecting water resources. The event, which gathered more than a thousand local and foreign visitors at the film’s actual scene Ita Thao Pier of Sun Moon Lake, revolved around an impressive 500-inch screen, thus, becoming the world’s largest outdoor 8K projection event. The film features ground-breaking 8K images of Taiwan’s unique water scenery during all four seasons of the year and addresses water resource challenges with the ultimate goal of heartening all stakeholders to protect the endangered water resources of our planet. Apart from the film, internationally famous Taiwan Vox Nativa Children’s Choir and Ita Thao Dance Performers who performed in the documentary, were both invited to perform on the event.

Mr. Bruce Cheng, founder of Delta and chairman of the Delta Electronics Foundation, said, “Over the years, our Foundation has contributed to environmental causes through education, including initiatives that utilize Delta’s display technologies capable of inspiring our stakeholders with their cutting-edge resolution and vivid colors. In the past, we have cooperated with Taiwan’s Public Television Service in the production of the HD film ‘Natural Formosa’ and also with the late director Polin Chi in the production of Taiwan’s first aerial photography documentary ‘Beyond Beauty: Taiwan from Above’, both of which highlighted the environmental damage caused by human activities and climate change with crystal-clear resolution. The ‘Water with Life’ film underscores the severity of droughts, coral bleaching and other related challenges in unparalleled 8K resolution, so that we all irrevocably understand the gravity of these matters.”

Ms. Shan-Shan Guo, vice chairman of the Delta Electronics Foundation, said, “Our ‘Water with Life’ film was firstly broadcasted by the Japanese satellite TV channel NHK BS 8K in March this year, and we have also continuously held non-profit screening events in Taiwan, Japan, and Mainland China for almost ten thousand people altogether. Numerous government officials and other prominent stakeholders have praised the film and our initiatives to raise awareness for water sustainability. Today, we are at the film’s actual scene, Sun Moon Lake, an area with an incredible wealth in regards to water resources and culture. We hope these incredible 8K images nurture an everlasting bond between the audience and our water resources that encourages all to learn, cherish and safeguard our planet’s water resources. We will further bring the film to the UN Climate Change Conference this year (COP25) to raise people’s awareness in confronting together the current global environmental crisis.

The “8K Projection at the Sun Moon Lake – Converging Greatness” event for the “Water with Life” film includes the performance of the world-renowned Taiwan Vox Nativa Children’s Choir, which played several classics such as “You Raise Me Up”, and “Kipahpah Ima” for Encore. Then, the famous local dancer group, Ita Thao Dance Performers, performed their traditional dance to show their respect to water, which also features in the film. By using Delta’s 8K projector with world-leading 36,000-lumen brightness, the revolutionary 8K images from the film allowed the more than 1,000 viewers to experience vividly the horrendous impact on water resources caused by climate change and human activities. At the end of the event, a floating sphere with diameter of 6m, also leveraging projected animation of the tribal legend from Ita Thao Community, symbolized the strong relationship between culture and the protection of water resources.

Sponsored by Delta Foundation, the 45-minute “Water with Life” production was filmed by Japan’s NHK Enterprises and is the world’s first 8K environmental feature film. It displays a plethora of water scenery in Taiwan during the four different seasons of the year. More than 50 professionals were involved in the creation of the film during a period of 1 year and 9 months. The unmatched quality and meaningful message of the film were decisive elements for being selected on NHK BS 8K satellite TV channel in March 2019.