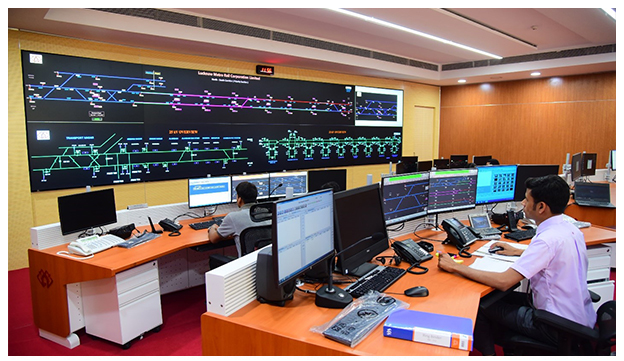 Delta, a leading provider of video wall solutions, has provided its brightest Laser Video wall solution to the Operations Control Centre of Lucknow Metro Rail Corporation. Lucknow Metro Rail Corporation (LMRC) is a project of Govt. of U.P., which is implemented to strengthen the transport infrastructure of the city with a holistic multi-modal transport system. Delta, with its expertise in display solutions, installed its latest and brightest solution in the market for this project.

Lucknow Metro Rail Corporation (LMRC) is the fastest built high speed rapid transit system project in India. Lucknow Metro is a Mass Rapid Transit System (MRTS) constructed to provide the city of Lucknow, Uttar Pradesh with an environment-friendly atmosphere, having two routes, from North to South and East to West. The North-South corridor starts at Amausi and ends at Munshi Pulia, with a total length of 22.878 kilometres. The East-West corridor starts at Charbagh Railway Station and ends at Vasant Kunj with a total length of 11 kilometres. Both lines intersect at Charbagh.

“The Operations Control Centre (OCC) is responsible for a smooth command and control of all stations and trains. The video wall will display dynamic status of each train, route and signal on a real-time basis and the status of the power supply on each section of the line. Faults in the supply, if any, will be noticed immediately through the Video wall and can be acted upon by the LMRC operators,” commented an LMRC official.

Delta, with a strong global reference base in the Railway Industry, recommended its latest and most innovative display solution for monitoring operations at the OCC of Lucknow Metro. The operations of the fastest built metro project will be monitored round the clock on Delta’s Video walls in support of train services and maintenance activities.

“Every day, the operators of the Operations Control Centre of Lucknow Metro will ensure the safety of millions of passengers by constantly monitoring train speed, signals, station activities and power supply. With the help of Delta’s display solutions we are assured that the security of passengers will improve and operators will promptly respond to emergencies, if any,” commented the LMRC official.

Lucknow Metro Rail Corporation (LMRC), incorporated on 25.11.2013 under the Companies Act, 1956, is a special purpose vehicle (SPV) to implement the Lucknow Metro Rail Project. The certificate of commencement of business was issued on 24.12.2013. This Company will jointly be owned by GoI and GoUP. The authorized capital of the Company is Rs 2000 Cr.

Delta, founded in 1971, is a global leader in power and thermal management solutions and a major player in several product segments such as industrial automation, displays, and networking. Its mission statement, “To provide innovative, clean and energy-efficient solutions for a better tomorrow,” focuses on addressing key environmental issues such as global climate change. As an energy-saving solutions provider with core competencies in power electronics and innovative research and development, Delta’s business domains include Power Electronics, Automation, and Infrastructure. Delta has 163 sales offices, 64 R&D centres and 39 manufacturing facilities worldwide.

Throughout its history, Delta has received many global awards and recognition for its business achievements, innovative technologies and dedication to corporate social responsibility. Since 2011, Delta has been selected as a member of the Dow Jones Sustainability™ World Index (DJSI World) for 7 consecutive years. In 2017, Delta was selected by CDP (formerly the Carbon Disclosure Project) for its Climate Change Leadership Level for the 2nd consecutive year.