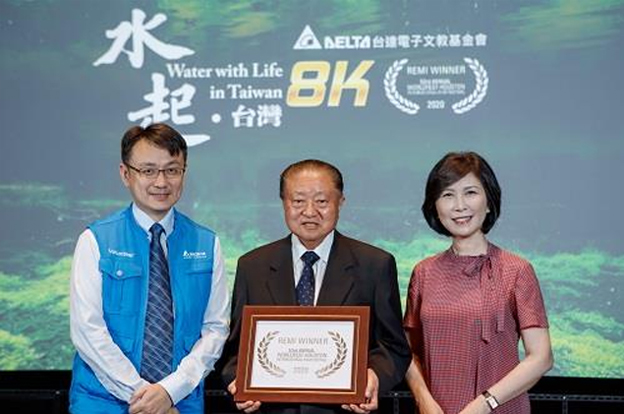 The world’s first 8K-resolution environmental documentary film “Water with Life”, produced by NHK Enterprises and sponsored by Delta Electronics Foundation, has won a Gold Remi Award-Shorts Documentary category in the 53rd edition of the WorldFest – Houston International Film Festival. This is the second time a Delta-sponsored environmental documentary film has been recognized at WorldFest, after “Beyond Beauty: Taiwan from Above”. A 4K-resolution version of “Water with Life” will be available for public broadcasting in mid-2020 to broaden its reach in schools and museums for environmental education purposes.

Ms. Shan-Shan Guo, vice chairman of Delta Foundation and project leader of the “Water with Life” film, said, “This documentary doesn’t focus on criticizing the environment problems we are facing. On the contrary, it uniquely highlights the grace of Taiwan’s water resources with groundbreaking 8K images. Each vivid 8K scene of this film was conceived to bring the audience’s souls closer to those gorgeous places, so that we all cherish and protect the natural resources of our planet.”

Ms. Shan-Shan Guo added, “How mankind protects the environment is a main axis of this documentary film. The wildlife rehabilitator for the Formosan landlocked salmon, the guide of Qilan Forest, and the young artists who created popsicles out of polluted water, are all captivating conservation stories within the film that have inspired every stakeholder to value our planet more. Also, the film includes several scenes reflecting culture elements related to water resources in Taiwan, such as dried persimmon making in Beipu, paper umbrella art in Meinong, traditional craft of hand-making paper in Puli, all put in place to highlight the joy of living in this treasure island. The way this film brings people and the environment together has certainly been a core feature valued by the jury of the Houston International Film Festival Awards.”

The WorldFest-Houston International Film Festival is one of the oldest and largest independent film and video festivals in the United States. This year, “Water with Life” was selected out of over 4,500 peer films as a Remi winner, thus, obtaining one more prominent international recognition since its broadcasting initiated on the NHK BS 8K channel in Japan last year.

“Water with Life” was sponsored by Delta Foundation and filmed by Japan’s NHK Enterprises and a team of over 50 professionals that captured the beauty and diversity of Taiwan’s water resources during the four seasons of the year, including scenes of Taiwan’s beach area Kenting, as well as Japan’s Hokkaido. Production of the documentary film took one year and nine months, as well as approximately one million US dollars. Delta Foundation is now supporting the filming of other two 8K environmental documentary films, one of them regarding humpback whales, and one regarding the effects of ocean warming on coral reefs.

NHK started broadcasting “Water with Life” in March 2019 on its BS 8K channel, and the film has been shown 41 times since then. In Taiwan, Delta has cooperated with large museums to hold non-profit screening events to display the film with its very own 37,000-lumen 8K projector. Unfortunately, the COVID-19 global pandemic has weighted on the film’s exposure as well, but Delta Foundation intends to issue a 4K version in mid-2020 to expand its reach within the environmental education segment.