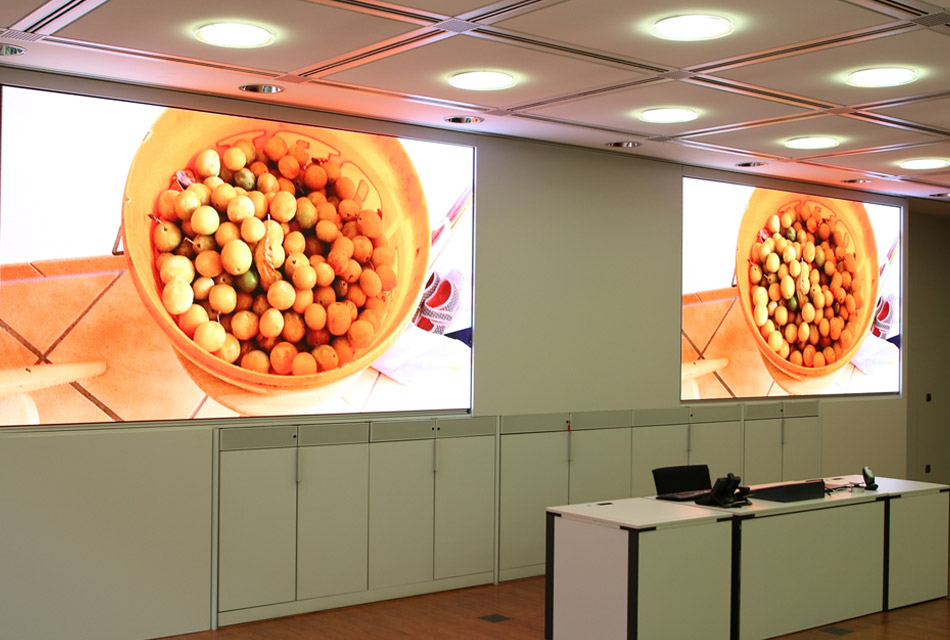 Since it was founded in 1966, Hannover Rück has become the fourth largest reinsurer in the world. With around 3,300 employees and 140 subsidiaries, branches and representative offices, the company is represented worldwide. Its strong market position requires leading-edge and optimally equipped conference and meeting rooms. While on one hand the rooms must offer the highest levels of current technical level excellence, on the other hand, they must also be flexible so that they can easily accommodate future developments.

One of the largest conference rooms in Hannover Rück’s main office is now equipped with two video walls, comprising LED modules from Delta. The company responsible for the installation was ROFI AV Media System House, which has more than 10 years’ experience in the AV industry. In fact, the company has already equipped several conference and meeting rooms for Hannover Rück or modernised them with touch displays.

To be effective, large conference rooms require presentation areas with a lot of space and light, so that the displayed contents are clearly visible even for those seated in the back rows. The two video walls from Delta have a screen size of 137.5 inches, which corresponds to an area of about 3 x 1.71 metres. Roland Fischer, Managing Director of ROFI AV Mediensystemhaus, ordered the Delta LED cabinets “Delta Full HD FE15” from AV specialists, Luxion. In addition, four Delta DC-600 controllers are used to position the content exactly on the video wall. The Fine Pitch Indoor LED modules of the FE series are characterised by excellent image quality and uniformity of illumination and are designed to deliver sharp and bright images, even in rooms with plenty of ambient light. The resolution of the two video walls is Full HD in 16: 9 format. The pixel pitch, which is the distance between the individual LEDs, is only 1.58 mm, ensuring sharp images from all viewing distances.

A big challenge came when installing the LED cabinets in such a way that they were aligned exactly with no lines between the cabinets. The installation solution was a coordinated holistic system and combining a professional frame with the Delta FE15 cabinets. The installation was managed and conducted by Delta and Visual Technology using a frame supplied by Btech. It delivered the required precision, with components preconfigured at the factory, thus saving a lot of time during final assembly. The main components of the two frames were assembled onsite before they were then fixed to the wall with heavy-duty screws to ensure that they were flush with the cabinet walls. A requirement of Hannover Rück was that the video walls and cabinets looked harmoniously connected.

It was the first time that Roland Fischer had installed a video wall solution from Delta, and it was also the first time that the LED cabinets were used in conjunction with a standard frame substructure. As expected of such high quality components, everything fitted together seamlessly and operated and functioned smoothly. Roland Fischer was impressed about the professionalism and service provided by the Delta engineers who helped with the installation; especially as the duration of the project only took five weeks, from commission to installation. The calibration of the video walls took place at night, as it had to take place under uniform brightness conditions that could not be guaranteed during the day.

Keeping customers satisfied, now and in the future